From leaving home on 20th July, we spent 6 days travelling  then 2 days catching up on our rest. By this time we were knocked for 6 with news of a bereavement. A clost family member had passed away but it was a very complicated situation which turned quite nasty. It knocked out out of action for a further couple of days so I have really fallen behind again. Anyway, here is a run down on the 6 days that we spent travelling.

We spent the first 2 nights with the couple who we rent our house from. They have a beautiful 8 bedroomed house just out of Granada and made us feel so welcome.Took us into Granada on the Thursday evening and again on Friday for the day. Treated us like royalty and didnt want us to pay for anything. We did manage a couple of things though.

We decided against walking around The Alhambra Palace as it was 38c and too hot to be walking around any more than necessary, but we did get some photos from a distance.

A few more random shots as we were walking around Granada 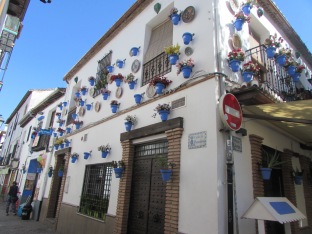 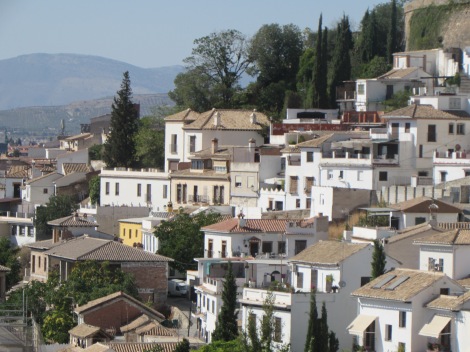 On Saturday morning we set off to drive to our overnight stop in Cordoba. For all that is was so very hot in Granada, everyone that we spoke to, when told where we were heading for next, told us that it would be even hotter – they weren’t wrong! Cordoba was 40c and terrible to walk around in that heat. We did, however, walk into town from our  hotel ( about 20 mins walk) on Saturday afternoon and again on Sunday morning but we did get a taxi back on Sunday lunchtime. 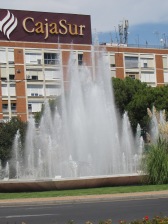 A couple of things we passed on our walk into town. The building was a block of flats and the different colours were shutters on the windows. The fountain looked so cool and inviting.

On Saturday afternoon we went round the Mezquita, which is a Cathedral built onto a Mosque.It is stunningly beautiful as you will see from the photos and also, lovely and cool.

On Sunday morning we went round the medina and did a little gift shopping before getting a taxi back to the hotel for a sandwich before setting off for the next leg of the journey.

When we arrived in Seville, we soon realised that it was, indeed, hotter than the other places that we had visited. At 42c we decided that we would take the bus into the city and then catch the city tour on an open topped but. We did the complete circuit without getting off, as did everyone else – everyone was feeling the heat!

Photos will be added tomorrow